Food Fraud – Are You Really Eating What You Think You Are Eating? 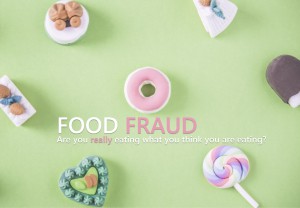 Thinking about counterfeit goods, clothing and accessories are usually the first things that come to mind. However, the food and beverage industry is also concerned and fake food scandals have drawn attention to this problem. Those recent scandals are not limited to one region; in fact counterfeiting is a global issue:

In the F&B sector, the counterfeiting can take different forms from food fraud, falsification, adulteration to falsification of a brand, protected geographical indication or designation of origin. Different reasons contribute to this growing issue including:

These reasons, coupled with a global but fragmented food supply chain, give counterfeiters opportunities to enter the supply chains by offering fraudulent ingredients and goods at an attractive price.

What are the consequences of food fraud?

In some cases, the counterfeit products may not pose a risk to public health, for instance where the origin or source of the product has been misrepresented, such as olive oil labeled from Italy whereas it has been replaced by cheaper Greek olive oil. Another example is when any valuable constituent has been in whole or in part omitted or substituted; a good illustration would be the “100% parmesan” actually filled with wood pulp (read more about Castle Cheese Inc. case here). However, other counterfeit goods could be harmful as toxic substances have been regularly traced in those products. For example, in 2016, Italian officers have seized more than 85 tons of olives painted with copper sulfate solutions to enhance their color.

Counterfeiting is a problem not only for consumer’s health but also for businesses. This practice can result in lost sales, erosion of consumer trust, reputational damage, and so on.

Despite the risks, the market for counterfeit foods continues to grow. It is difficult, even nearly impossible to know exactly how many products are produced and sold in the world, but it is clear that this is a growing concern. Indeed, in 2016, an Interpol-Europol operation announced their largest-ever seizures of fake food and drink across 57 countries, including the US, with more than 10,000 tons and one million liters of fake food and drink seized. A year later, the operation has resulted in the seizure of food and beverage products worth an estimated US$270 million, ranging from alcohol, seasoning cubes, seafood and olive oil to caviar. This operation has also highlighted new trends such as counterfeit mineral water.

Food fraud – What can you do?

Everyone can take various steps to address the threat of food fraud. Manufacturers need to set the highest standards in term of detection of possible counterfeiting within their own operations – e.g.: appropriate testing procedures – they should also monitor their suppliers’ activities on an ongoing basis. Moreover, it is in a company’s best interests to ensure that its products’ quality follow the FDA regulations. Indeed, the Federal Food, Drug, and Cosmetic Act (FFD&C Act) “mandates the safety, purity, and in some cases the “effectiveness” of the products within its scope”, it also “requires truthfulness and completeness in product labeling and other marketing communications”.

How can counterfeiting affect your company?

A product goes through different stages during its lifecycle from formulation, production to market launch. To create this product, different ingredients may be used, and are often sourced from various suppliers. So imagine that you discover that one or more of the ingredients used in your recipes are actually counterfeited. This can become an unwieldly process to go through your entire product portfolio to identify which products contained the counterfeited ingredients. With Lascom PLM solution, you can easily and quickly identify the products using those ingredients, and take the appropriate actions, such as performing mass replacement of any ingredient.

Learn here how Lascom enforces quality and compliance throughout your product development process.