By Melissandre CPG News No Comments 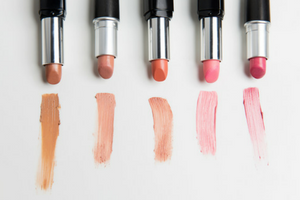 Lipstick is an iconic part of the cosmetics industry. Constantly being renewed and innovated, lipstick has changed significantly over the centuries and has also changed in what it represented.

How it all began

Lipstick has been dated back to ancient Sumerian men and women over 5000 years ago who crushed gemstones as a sign of power. Back to the Egyptian time of Cleopatra who used crushed bugs to decorate the lips as a sign of social status. In the 16th century, Britain the white face and the red lips was also a symbol of social status.

The first commercial lipstick was created in 1884 by perfumers in Paris, France. Then it was made from deer tallow, castor oil, and beeswax. In the 19th century United States, Carmine dye was extracted from Cochineal- an insect native to Mexico and Central America- however, it was frowned upon and considered unnatural. That changed when the dye was mixed with an oil and wax base causing the color to be faded and therefore more natural.

In 1923, the first swivel-up tube was patented by James Bruce Mason Jr. in Nashville, Tennessee. A huge improvement from the impractical clay pots that used to hold lipstick which caused a dye residue to always be left upon the fingers.

During World War 2, women filled research and engineering jobs left by men and in the 1940s Hazel Bishop, an organic chemist in New York created the first long-lasting lipstick that didn’t need to be consistently reapplied. A huge step forward for Lipstick.

How lipstick has changed over the past century

As social status and culture changed so did lipstick to reflect it.

And as lipstick evolved in terms of colors to reflect various aspects of the present society so did what the lipstick was made of as well.

In the very beginning lipstick or lip stain was made from crushed gems, bugs, and plants. There was no added oils or wax.

After going through several chemicals and tests of possible carcinogens, today lipstick is made of beeswax, ozocerite and candela wax for its high melting point.

Oils that are used to give it smooth and hydrating effects are olive oil, mineral oils, cocoa butter, lanolin, and petrolatum.

Extra effects that lipsticks have evolved are:

For more information on how to renew your product portfolio and efficiently innovate your products, learn more about Lascom’s PLM solution.